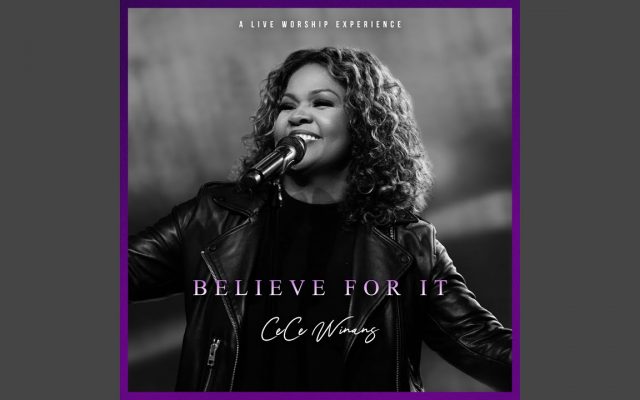 The incomparable CeCe Winans is thrilled to release her newest album Believe For It. For over three decades she has consistently rolled out an array of music that has evolved into all-time classics. Now she’s back with her first live recording taped in Nashville, Tennessee. The highly anticipated Believe For It is an inviting 78 minutes of worship, offering 12 engaging tracks that highlight some of the biggest songs in Christian music today and became one of the most pre-added albums worldwide on Apple Music.

“This album is filled with such powerful songs that need to be heard around the world. I believe some amazing testimonies will be shared after people listen to this project,” says Winans.

The award-winning trailblazer delivers two new cuts on the upcoming album, including the title track “Believe For It.” Penned by the collaborative efforts of Mitch Wong, Kyle Lee, Dwan Hill and Winans, “Believe For It” recently hit #1 on the Billboard Gospel Digital Song Sales chart, is Top 50 on Spotify’s Viral 50 chart, and is already picking up airplay on significant radio stations across the country. While “Believe For It” is a highly anticipated return to Christian AC radio, “Never Lost,” the lead single from the worship collection also rose to #1 on the Billboard Gospel Digital Song Sales chart, hit Top 5 on Billboard’s Hot Gospel Songs chart, Top 10 on Billboard’s Gospel Airplay Chart and was recently nominated for an NAACP Image Award in the Outstanding Gospel/Christian category.

Winans adds her distinctive sound and style to the contemporary hymns that has been sung in churches worldwide. The debut single from the worship collection, “Never Lost” rose to #1 on the Billboard Gospel Digital Song Sales chart, the top 5 on Billboard’s Hot Gospel Songs chart, and was recently nominated for NAACP Image Award in the Outstanding Gospel/Christian category.

It has been four years since Winans’ last (non-holiday) recording of Let Them Fall in Love that marked her return from a decade-long hiatus, but it was worth the wait. The offering of that musical smorgasbord put an additional two Grammy Awards under the singer’s belt, making it an even dozen. There is very little space left on the shelf after her 23 Dove Awards and 15 Stellar Awards are added to the display. Over 17 million fans have purchased Winans’ music world-wide, and after this latest installation, that number will continue to rise.