Louisiana had come a long way since the 1960s when civil rights activists’ efforts started to take shape. It took a while for Louisiana, Caddo Parish, in particular, to catch up with the changing times and the supreme law of the land. But they eventually did with the integration of public schools.

As she gently massages her long-time client’s scalp, Carolyn Jones refers to the beauty salon she now owns in Shreveport’s Allendale neighborhood, a salon rich with African American history.

“My daughter told me, ‘Mama, do not change a thing,'” Carolyn Jones said.

Jones remembered going to that same salon when she was a little girl. The neighborhood it is housed in does not look like much now, but in the 1960s, Allendale had beautiful homes and businesses owned by African American entrepreneurs and professionals. Some of whom were parents fighting to get their children into better schools.

In 1953 and ’54, the United States Supreme Court struck down separate but equal laws in the famous case of Brown vs. The Board of Education of Topeka, Kansas. But it took Caddo Parish more than a decade to catch up with that ruling.

In 1965, Jones’ father, E. Edward Jones, a well-known civil rights figure and pastor of Old Galilee Baptist Church, filed a suit against the parish, ordering that they desegregate. Jones and many other parents won their case.

“When my mother discovered that the schools would be integrated and that one of her children would be going, she was stunned to realize it would not be her eldest child or even my older brother who is one year behind my sister,” Jones said.

That was because all African American students were not allowed to attend school.

“That is the way Caddo Parish sought to desegregate schools,” Jones said. “They did a little at a time, especially that first year.” 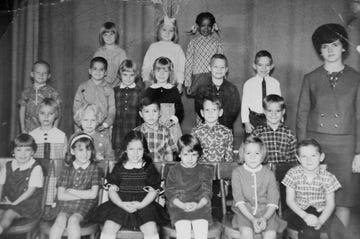 Jones said C.E. Byrd High and Creswell Elementary were among the first two schools to chosen to integrate. Jones’s parents chose her among her siblings. She attended Creswell.

“With him having raised me with a firm faith foundation, knowing how to treat others, knowing how to respect others, and being a naturally outgoing child, they thought I would be just fine,” she said.

It was a transition that took her a little while to get used to.

“When I found out I was going to a new school, I was holding my mother’s hand and walking up that long walkway to Cresswell Elementary through that sprawling landscape down in front. I thought, ‘Wow, this is a big place,'” she said.

Jones quickly realized she looked different from everyone else but remembered Creswell as welcoming.

“The principal was very welcoming, very stern,” Jones said. “Ms. Margaret Bacheldor was her name, but she was just a sweetheart. she was naturally concerned and let me know, ‘if you have any problems, Carolyn, you can come to me.’ My first-grade teacher was very professional. Her name was Mrs. Cannon. She had a beautiful brunette head of hair that was kind of cropped and sprayed into place, but she was very professional, and she cut no corners.”

While the administrators were more welcoming, Jones’ classmates took a little longer to adjust.

“We got to learn one another. By the end of the first year, I had a couple of, what I would consider, pretty good friends,” Jones said.

Jones also remembers what it took to see that change. Before owning Modern Beauty Shop, Jones remembers the conversations of many women who once sat in those same chairs, talking politics. Buried deep in the drawers were stacks of old voter registration forms Jones found, a testament to the social and legal changes they sought to create.

“I feel like we still have a long way to go, but in a way, we have come back to where we left,” Jones said. “What is missing in a lot of cases now, I feel, is the pride in the community, pride in our families, pride in our ability to raise our children well. Wherever your children go, you should be there. That is what my mother did.”

Jones is launching a tour and open house at Modern Beauty Shop for anyone who wants to learn about the community’s history.