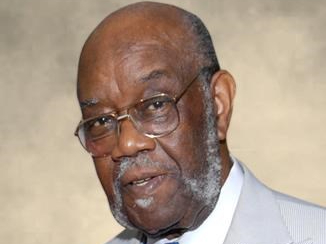 Dr. E. Edward Jones was a known civil rights leader, who also became the first African American from Shreveport to serve as President of the National Baptist Convention of America.

Rev. Jones served as pastor of two congregations at the same time, Sweet Home Baptist Church of DeRidder and the Mount Calvary Baptist Church of Lake Charles, Louisiana. Early in life, at the age of seven, E. Edward Jones was converted and baptized at the Sweet Home Church. In 1948 he received his high school diploma from Beauregard Parish Training School.

Rev. Jones attended Grambling State University from 1948 to 1952. Between his freshman and sophomore years, he acknowledged his call to the Gospel Ministry. The year was 1949 and Dr. Jones was licensed to preach at 18 years of age. He was ordained a Baptist Minister in 1951. From 1950 to 1952 he was Class President and a member of the varsity basketball team. Graduating from GSU in 1952, he received a Bachelor of Science Degree in Education. In 1961 he received a Bachelor of Arts Degree in Religion and Philosophy from Bishop College, which was then located in Marshall, Texas.