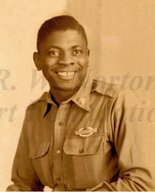 As a young, Korean War veteran in the 1954, Hines applied to become a police officer for the City of Shreveport. This, following a challenge from the Negro Chamber of Commerce to the city commissioner to hire black officers. Hines was accepted and became the source of integration of the Shreveport Police Department. Hines retired 21 years later while paving the way for more blacks to be promoted in ranks. It took courage and even a lawsuit to break down racial walls for others, yet he got the job done.

We salute William Hines, a first in Shreveport Black History!