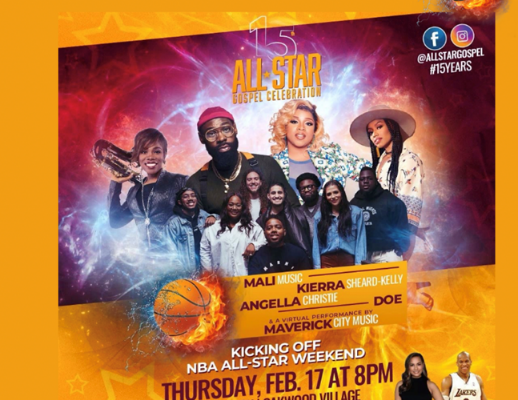 The commemoration will honor doers and game-changers in the sports industry. Honorees include co-owner of the Milwaukee Bucks, Valerie Daniels Carter, with the Slam Dunk “Game Changer” award, former Executive Director of the National Basketball Players Association, Billy Hunter, with the “Faith & Endurance” award, as well as father and son duo Pastor Larry Macon Jr. and Pastor Larry Macon Sr. with the “Living Legend” award.

For 15 years, a Female-Black-Owned Production Company has produced All-Star Gospel Celebration during a male-dominated sports weekend. Executive Producer Tomeka B. Holyfield takes pride in producing such an epic and celebratory event. ASGC, whose theme this year is “Faith and Philanthropy,” has been exceptionally successful during NBA All-Star weekend paying tribute to NBA players, wives, coaches, high-profile individuals, and community leaders who effect change in the lives of others while portraying an inspiring and motivating image. The 15th Annual All-Star Gospel Celebration will celebrate faith and philanthropy during NBA ALL-STAR WEEKEND in Cleveland by bringing together unity, diversity, peace, love, and power!

National Attention has been brought to the Christian Community in each city NBA All-Star Weekend has traveled, leaving a lasting impression on individuals who’ve attended these events. Some of the Hottest Gospel/Christian Artists have graced the stage as everyone enjoys three hours of Crazy Praise year after year! This year, ASGC will once again honor some extraordinary individuals as our Slam Dunk Honorees and Celebrate the Faith during NBA ALL-STAR WEEKEND! Please find event details below:

Tomeka B. Holyfield was selected by the NBA All-Star Entertainment Division in 2006, to produce an Inspiration component in conjunction with NBA All-Star Weekend. For 15 years, her “All-Star Gospel Celebration” (ASGC) has kicked off the weekend of festivities. ASGC has become the flagship production within the RCM Media Productions portfolio, which provides a one of a kind platform bringing together; Gospel Artists, the NBA Chaplains Association, NBA Wives Association, NBA Players, their families, and their fans locally and from around the globe – in one arena for one night, to kick-off NBA All-Star Weekend, An evening full of inspirational praise and philanthropy. “A Party with/a Purpose”