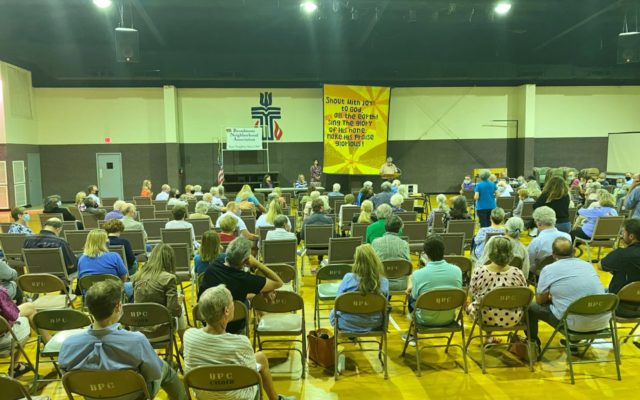 SHREVEPORT, La.  – Members of the Broadmoor Neighborhood Association learned more Tuesday about proposed plans for a truancy center at the Arthur Circle Elementary school that’s been vacant since last year.

“I see the need for a truancy center in Shreveport, there is no question about that, but one of my concerns is, have they studied where the predominant truancy numbers come from?” Tutu Baker asked at a meeting in which Caddo Parish School Board member who first floated the proposal earlier this year answered questions from the neighborhood’s residents about the plan.

“This is a follow-up to the proposal that I put out. I just want some community involvement and engagement,” District 8 member Christine Tharpe said ahead of the meeting. “I know people have questions and concerns and that’s what tonight is about.”

Tharpe wants the vacant, 65-year-old Arthur Circle campus to be leased to the non-profit Volunteers for Youth Justice (VYJ) so that it can be used as a multi-purpose service center to deal with truancy among youth from Caddo and surrounding parishes. In Tharpe’s vision, “The Center” would be a central location for these services to be offered to schools and parents.

Tharpe has said she learned about increasing truancy among Caddo school children during a visit to Caddo Parish Juvenile Court, a problem that has only been made worse by COVID-19. She said creating a “one-stop-shop” for juvenile services at Arthur Circle would put the property back into productive use.

Under the plan, Volunteers for Youth Justice would be the primary “tenant” of the property, leasing it from the school board. VYJ would, in turn, provide space to other organizations involved in school and parent services such as truancy intervention programs, conflict resolution, mentoring and leadership development programs, teen court, along with life skills and parent education.

Broadmoor Neighborhood Association Vice President Bill Robertson planned to offer a resolution Tuesday urging the school board to hire a professional land-use consulting firm to help the school board determine the best uses of the Arthur Circle, Timmons, and Mooretown campuses.

The three elementary schools were closed last year and students were moved to other campuses in the district in an effort to address a $12 million budget shortfall brought on by declining enrollment coupled with the coronavirus pandemic.

“I think the board has got a responsibility to itself, to the taxpayers of Caddo parish, and also to the people in Broadmoor,” Robertson said.

At a meeting in January, one resident suggested the school board sell the property for real-estate development. Goree said at the time the land is zoned by the city for single-family homes and could fetch an estimated $1 million in a sale. He said any project to develop the land would be evaluated on whether it “brought value” to the neighborhood.

At least one developer has proposed such a housing development on the property that would consist of 25 single-family lots, a public green space, and a commercial storage facility in the school buildings. The E&L Development Co., represented by Ken Lawler and son Jake of Blanchard, wants to build homes on 60’ x 40’ lots selling in the $300,00-400,000 range and like other developments in Blanchard and south Shreveport. Lawler said a proposed plan for the 12-acre development has been provided to select school board members and central office staff.

However, Tharpe said Tuesday the property would have to be up for sale before they can consider any offers.

“Currently the school is not for sale. that would have to be voted on by the board and so Arthur Circle is currently not for sale.”