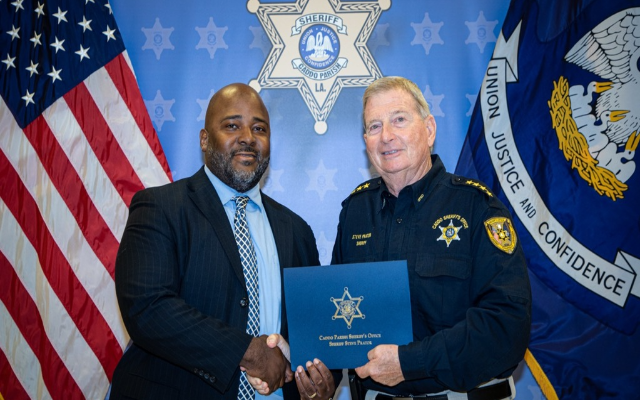 Caddo Sheriff Steve Prator promoted seven deputies on Tuesday, September 30, during an 8:30 a.m. ceremony at the Re-Entry Facility at 1121 Forum Drive. The Sheriff also recognized 46 employees for their years of service with the Caddo Sheriff’s Office.

Michael Vaitkus has been promoted to lieutenant in the Patrol Division. He has worked as a deputy in corrections and patrol during his 25-year career.

Thomas Englade was also promoted to Patrol lieutenant. He has served in corrections during his 14-year career.

James Norwood was promoted to Sergeant in the Patrol Division. He has been with the Sheriff’s Office for 21 years and has worked in corrections and patrol.

Christopher Daniel was promoted to Financial Crimes Sergeant in the Criminal Investigations Division. He worked as a corrections and security deputy at Caddo Correctional Center for the first half of his 20-year carreer and has been a detective since December 2013.

Tony LeBlanc, who has served in the Caddo Parish Homeland Security for eight years, was promoted to sergeant. He came to CPSO following a 30-year career at the Shreveport Police Department where he retired as a captain.

Durrell Williams, who has served seven years, was promoted to sergeant in the Detention Division. He has served in the booking and security departments.

Mikeasha Anderson, who joined the Sheriff’s Office five years ago, is being promoted to sergeant in the Detentions Division. She has served in the security and transportation departments.