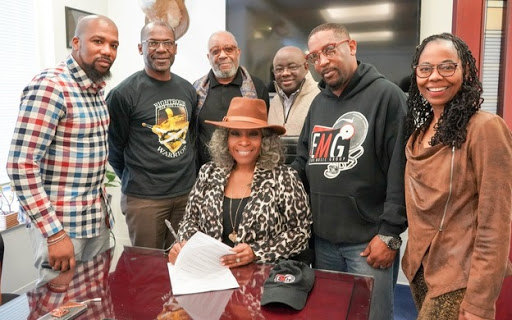 Philadelphia, PA — Enon Music Group (EMG) is one of the fastest-growing record labels in Gospel music. They have delivered Stellar Award-nominated artists and Billboard Chart Topping songs and albums from their wheelhouse. Founded by Dr. Alyn E. Waller, EMG’s mission is to be a respected resource for quality music and artist development anchored in integrity and theologically centered music.

Singer San Franklin is noted as one of Gospel and Christian music’s most commanding vocalists and professional session singers. The vocal beast has been heard on a plethora of award-winning albums and has provided her vocal prowess to Donnie McClurkin, CeCe Winans, The Newsboys, Beverly Crawford, Yolanda Adams, Aretha Franklin, Jill Scott, VaShawn Mitchell, The Clark Sisters and many more.

EMG is pleased to announce that San Franklin is now the label’s newest signee. The marriage of EMG and Franklin has formed an electrifying partnership that is going to give heat to the Gospel music genre and will give fans a musically masterful soundtrack for worship and praise.

“San Franklin is the consummate blend of equal parts of sugar and spice,” shares Garland “Miche” Waller, Vice President of EMG. “I have watched San for a long time, and each time she sings she never fails to usher the audience into a praise epiphany. San comfortably wears the residue of growing up in the shadows of the great Chicago Gospel music dynasty, while at the same time exhibiting her West Coast legendary musical influences.”

Waller continues, “San effortlessly displays her versatility to adapt to any music styling. She conveys a clear message of the joy of knowing and trusting the God that she sings about. Her faith is strong and deeply rooted. She sings her convictions in her songs which draws people to be convicted and to ultimately become a believer.”

“After over 30 years of working in the music industry and in every vocal facet, I’m so excited to be a part of the ENON family,” Franklin states. “I think ENON is the perfect fit for me and the eclecticism of ministry that defines me! When one wears the many hats as I do it’s sometimes hard to navigate from one to the other with ease. But, I believe with ENON, I’ve found the perfect GPS!!”

She continues, “With Dr. Waller and musical phenomenon Garland “Miche” Waller, how can I go wrong? When I was approached about becoming a part of the label, it was a no-brainer decision and a win-win opportunity!”

More details about the forthcoming THE FREE PROJECT will be shared soon. Fans will get a sneak-peek of the album by following San and EMG on social media.