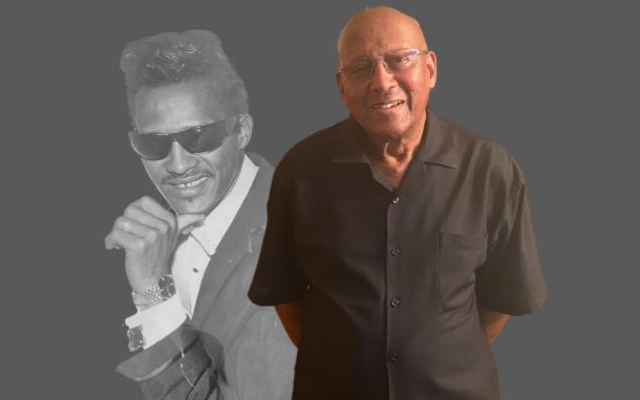 KOKA The Heart of Gospel is pleased to announce a celebration for Sonrose Rutledge, formally known as Gap Poppa, “The Godfather of Louisiana,” Radio personality for over thirty-seven years. He was born and educated in the Birmingham, Alabama, school system.

Poppa is honored as one of the great radio announcers in the Birmingham Alabama Black Radio Museum. He started his radio career in Bessemer, Alabama, in the early 1950s. He came to Shreveport as an announcer for KOKA in the early 1960’s.

Upon first surveying the Shreveport, Louisiana Black Radio market, he immediately saw very little involvement in the community. After getting his name and Radio show established in the market. He reached out to the schools and formed what he called “Roll Call or Check-In,” where before the kids would answer roll call announcing they’re being present in class, they had to make sure their school had checked in for roll call that day on Poppa’s morning show. Kids looked forward to doing it every morning. He figured that if you got the kids on his side, they would automatically pull the parents over, and it worked. He ended up being a great role model.

Poppa made sure he was available for them as M.C. free publication through the radio station whenever the schools had something special. Many schools would bring their classes during field day to watch through a large clear glass window as the Poppa did his show on the radio. Even made personal appearances at their schools for money-raising events whereby the schools would keep all the proceeds to support their projects.

Poppa also saw the city’s young adults need to have somewhere to go for entertainment. So he took his radio show live to the clubs, schools, recreation centers, etc., called it “Thing Night” inside and outside the Shreveport for a small affordable admission fee. Along with the radio station, he received many awards for their participation from schools all over the city.

Here literally hundreds came, had a good time, and went home to await the next time to go and do it all over again.

He also saw the need for Shreveport-Bossier to get the same entertainment the larger cities were receiving from the famous Black entertainers. So he formed Gay Poppa Enterprises Inc., teamed with booking agencies around the country, and started promoting big-time concerts at the Municipal Auditorium and Hirsch  Memorial Coliseum. Like James Brown, B. B. King, Al Green, Aretha Franklin, Otis Redding. Gladys Knight and the Pips, the O’Jays, Michael Jackson and the Jackson Five, Earth, Wind and Fire, Marvin Gaye, Ike, and Turner Turner, and many others too numerous to name at very affordable admission. Most of the time, Poppa would M.C. the concerts himself. Entertainers that Shreveport/Bossier and surrounding cities never thought they would see in person.

Poppa went from Radio Announcer to Music Director, To Program Director, and in the fall of 1973, he became the first Black man ever to manage a Shreveport broadcast station.

Before this, Poppa joined hands with such organizations as the Sickle Cell Anemia Foundation. The station did an all-day radiothon once a year, and thousands of dollars were raised to help find a cure for that dreaded disease.

Poppa also joined hands with The Christians Services Telethon every year and helped the poor, needy, and homeless where needed. One year (1993), the telethon raised more than $81,000.00. He and Station KOKA partnered with the Black Negro College Fund, where thousands of dollars were also raised for students.

At what seemed to be the height of this career, he had a vision of KOKA becoming an all gospel radio station. After much prayer and negotiation, he convinced the general station manager James Reeder, that it very well could indeed work. So last February 1987, Poppa, who gave up the name he had used in Radio for decades, did his final rhythm and blues radio show. Made an on the air vow to God and his audience that they would never hear his voice on a rock, rhythm, and blues radio station again. He bid his listener’s farewell and said he would be there come Monday morning at the same time as Brother Rutledge, and he asked his listeners to join him in serving the Lord. And he affirms that he could not have made a better choice.

Thirty-four years later, Sonrose is still bubbling over what God has done for him and his family.