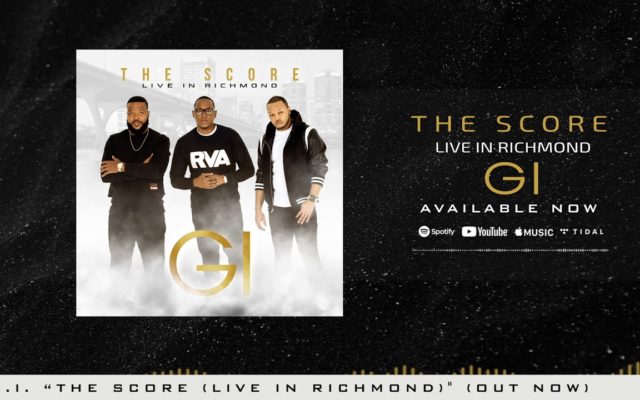 Stellar and Dove Award Nominated Artist G.I. releases their first live album in their 20-year career: “The Score: Live in Richmond.” Slated for release this Friday January 22nd, “The Score” was recorded live at Speaking Spirit Ministries in Richmond Virginia and features live arrangements of G.I.’s hit songs over the last decade. This is the international group’s first compilation album of sorts. Stand out songs include “Get Up Live,” “I’m Ready,” their major breakout hit/crossover single “Pray and Don’t Worry Live,” and their most recent Top 20 hit single “So Good Live.” The album is a reunion in fashion as former G.I. member Artist Anderson (Marlon Anderson) made a surprise appearance at the concert bringing many fans out of their seats and to the edge of the stage. One concert attendee says, “It was like a Wu-Tang Clan reunion. Nobody knew Marlon was going to be there. When he came from the back and jumped on stage the crowd went bananas.”

When asked what brought about the title of the new project, group member Lamonte says “Score” in definition is the number of points, goals, and runs achieved by a team. “Score” is also connected to the number 20. For 20 years, we’ve recorded, traveled, and ministered as a team: a team of ministers, singers, songwriters, musicians, actors, and most importantly brothers. When we recorded this album we were celebrating 20 years of ministry. Some groups can’t stay together 20 days, let alone 20 years. We felt like this album was a score in general: a win in the books: to record a live album and make it to 20 years as an independent group in an industry that can tear groups apart in their first year is incredible.”  When asked how was the concert that special night, group member Curtis says “The concert was fire! The audience was amazing. You can hear them singing along on most of the songs. We can’t wait for everyone to hear it. This one is for the fans.” When asked what they would like “The Score” to achieve, group member Branden says “We’d like this album to not only minister to the hearts of the people, but encourage them to let them know if God did it for us, He can do it for you. If you have a dream, go for it. Keep the faith and work hard.”

“The Score: Live in Richmond” is released on the group’s Top 10 Independent Billboard Charting Label BGA Music Group, in partnership with United Alliance Music Group, The Orchard, and Sony Music.  Stay connected with G.I. on their social media platforms. Fans can follow on Instagram: at @giforever3 on Twitter: at @giforever3 on Facebook: at @giforever and their Official Website at www.gi.world.