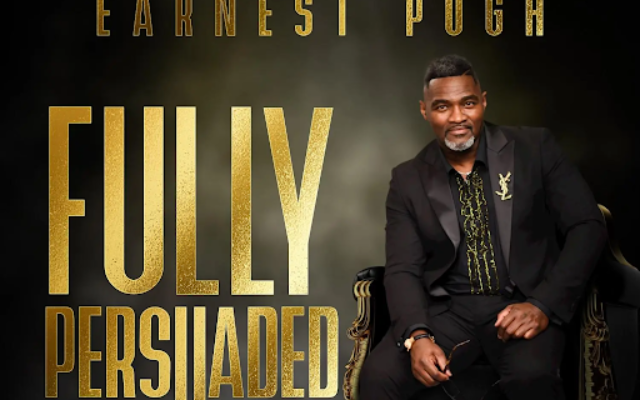 Gospel music legend Earnest Pugh has revealed the album artwork for his 13th album, Fully Persuaded, which will release in the first quarter of 2023 on the Philadelphia-based Estabrook Road Records label.

On the cover, Pugh is dressed in a suave black suit and seated on a Modern Louis XV French Provincial chair. The suit was made by Pugh’s own e-Factor clothing line that he hopes to introduce to the public next year. He’s sockless in red-bottom shoes that were custom made for him by ShopJosephs.com in Texas. “I often need unique things and wardrobe for my stage performances,” Pugh says. “There’s this fantastic black-owned company Shop Josephs.com that made those shoes just for me.”

The photo was taken by Patrina Anthony who has been shooting for Pugh for nearly twenty years and Blair Monique Walker, who also has a long history with Pugh, was the graphic designer. “They both know me so well that I don’t have to tell them what I want because they read my mind,” Pugh laughs. “ Blair was a professional singer before she pivoted to graphic design, so she sees everything through a different lens.” Walker picked up on the gold  streaks in Pugh’s shirt and on his lapel pin and illustrated the fonts with a similar tone. It makes for a commanding image that epitomizes Pugh’s regal manner and aesthetic.

The eight-track album was produced by longtime Pugh associates Rufus McGee, Keith Williams, and Alex Johnson. “I’m so proud that  three of my favorite  singers on the planet Zacardi Cortez, Crystal Aikin, and Nakitta Foxx were available to sing on the album, “Pugh adds of the sold-out live recording session that took place at Miracle-Valley Deliverance City Church in Rochester, New York. “They each bring something unique and special to the table.” The songs range from Sunday Morning foot-stomping tracks  and hymns, as well as, an update of Pugh’s 2009 Top 20 hit, “The Great I Am.”

The album includes Pugh’s remake of Evelyn Turrentine-Agee’s classic, “God Did It,”  a 2001 BMI Award winning song. “A lot of people don’t know this,” he confesses. “But that song got me through one of the worst periods of my life. Although, I was vaccinated, I came down with such a severe case of COVID-19 that I almost left here. Throughout that ordeal, I held on to lyrics in that song that God did it in the past and God will do it again. That encouraged me. When I was healed, I felt I had to record that song to remind people that everything that happened to me that was good, God did it.” Well, we’re fully persuaded.