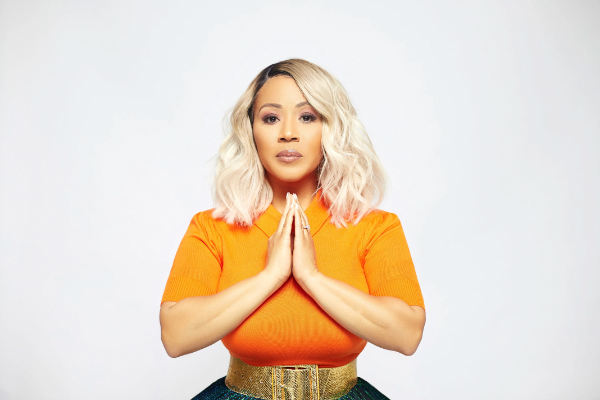 After nearly 25 years as a Multi-Grammy award-winning inspirational artist, television star, and syndicated radio show host, Erica Campbell is still celebrating career milestones. This week, Erica is celebrating her first #1 single on gospel radio as a solo artist. Her latest offering, “Positive,” which was released in March, currently sits atop Billboard’s Gospel Airplay chart and the Mediabase Gospel Radio chart. “Positive” is the first single from the highly anticipated full-length album scheduled for a Spring 2023 release through My Block Inc.

“I’m so excited because I wanted this song to shift people’s mood,” the singer said in a video, thanking fans for their support. “I wanted them to speak life over themselves, expect the great, and know that there’s greatness inside of you. And you helped me do that! So thank you for helping me get positive to #1!” Erica’s intent for the song is quite clear in its lyrics, which she wrote alongside Juan Winans and Warryn Campbell (who also produced the song). “Positive” encourages listeners to lean into the assurance of knowing that God is in control, even in uncertain times.

While “Positive” is her first bow at #1 on Gospel radio as a solo artist, Erica is no stranger to that #1 spot. Her 2015 single “I Luh God” featuring Big Shiz topped Billboard’s Hot Gospel Songs chart – a hybrid chart that includes radio, streaming, and digital downloads. “Positive” entered that chart 12 weeks ago and remains in the Top 20. The song is also Erica’s latest single to crack the Top 10 on Billboard’s US Gospel Chart.

In addition to her continued success as an artist, Erica Campbell also touches fans’ lives as the host of the nationally syndicated morning show Get Up! Mornings With Erica Campbell. Currently available in over 30 markets nationwide via Reach Media, the show sets a new bar for syndicated morning programming by creating a high-energy experience for listeners through various music styles, powerful interviews, lively features, and a fresh approach to news and listener engagement.