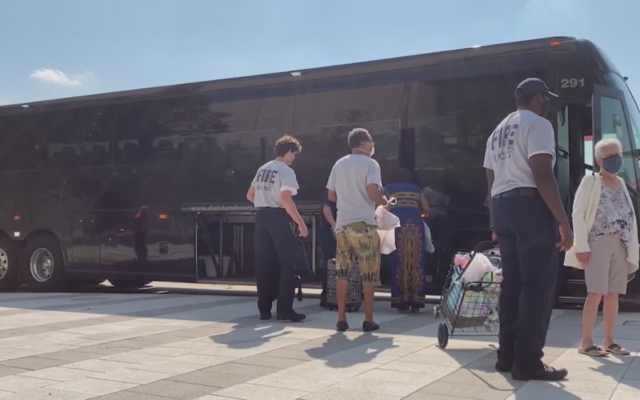 SHREVEPORT, La.– Dozens of evacuees from south Louisiana arrived in Shreveport over the weekend to escape the heat and power outages in the wake of Hurricane Ida.

As of Sunday morning, there were 317 people staying at the old Sam’s Club building on Jewella. Among them are some of the several hundred evacuees that boarded buses out of New Orleans over the weekend headed for state-run shelters in Shreveport, Alexandria, Bastrop, Ruston, and Baton Rouge.

New Orleans Homeland Security Director Colin Arnold told WGNO on Saturday that the city didn’t like using the word “evacuation” but nonetheless, he said the city’s plan is working well – getting the most vulnerable residents, the elderly and those with children, out of the misery of days without power.

“It’s absolutely crucial,” said Arnold, “to make sure they’re safe. It’s the best we can do, and it’s what they deserve.”

Each bus can take about 45 people, and Arnold said New Orleans was prepared to send as many as 2,500 people a day to North Louisiana shelters.

“That was the number that we planned for. We’ve had significantly less interest in this program, but we continue to run it.”

Louisiana Department of Children and Family Services spokesman Sean Ellis says capacity at the Shreveport shelter is currently limited to 1,200 beds, which is 1,000 less than it would if it were not for the spacing required for social distancing due to COVID-19.

“We can work with parishes to identify a need, as per whether that’s opening a new shelter or rerouting people looking for sheltering to another shelter,” Ellis said.

As for how long the evacuees can expect to stay in shelters, Arnold says it will depend on how long it takes to restore essential services back home.

“I will make that determination once we have power substantially restored and services are open, such as stores and gas, and when things are getting back to normal. And I don’t anticipate that being an extended period of time. I would say like days certainly not weeks. ”