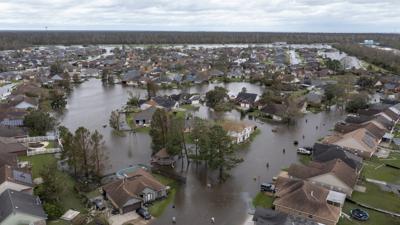 SHREVEPORT, La.– Hurricane Ida forced thousands of families to evacuate from Southeast Louisiana, with some heading to Shreveport. NBC 6’s Darran Todd spoke with his own family who relocated from New Orleans to escape the devastation of Hurricane Ida.

“I had that same sense and urge that I had during Katrina, that this was going to be it,” Julie St. Amant told KTAL/KMSS crews.

Terrance Bennette and his wife C’onda Bowman evacuated New Orleans just like the thousands of others from southeast Louisiana. They came to Shreveport to seek a safe haven from the storm.

“I wasn’t in New Orleans during but Katrina but I heard all of the stories. The flooding, the roof off of the house, and losing family members. It was just a lot and I didn’t want to take that chance,” Bennett said.

C’onda was born and raised in New Orleans and said the time away from her family has given her anxiety.

“Usually when we ride out hurricanes we ride them out together. Leaving them behind has been really difficult. and it’s been different it’s not something I’ve ever done before,” Bowman said.

She said that her family who stayed are okay but communication has been limited due to mass power outages.

“They do not have power but they’re doing good. They’re using generators to have power temporarily. I asked them to come with me and they said that they were going to stay. My dad told my sister that if they leave who is going to save the people.”

Hurricane Ida made landfall in Louisiana,16 years after Hurricane Katrina. Bowman was 13 years old at the time and reflects on the dramatic day.

“We were inside of our home and water just came rushing through the door. We had to go to our attic. My dad ended up busting a hole at the top of our attic to get to higher ground. Once we got out, we were there sleeping in hotel rooms or anywhere we could find until we were able to evacuate.”

Bennett and Bowman said they found out their home suffered little to no damage but others weren’t so lucky.

Julie St. Amant said once she evacuated she went to Beaumont, Texas, and was forced to sleep in her car. She then came to Shreveport with family friends.

“My neighbor went in and assisted the house and asked me did I want the good news first or the bad news, and of course when he gave me the bad news he let me know that in several bedrooms in the house the ceilings had collapsed.”

“Anything above a Category 2, I made a decision I would not stay in the city,” St. Amant said. “We’re safe and I think at the end of the day I feel better about that. I think I made the best choice by leaving and I don’t regret it.”

She said in the event of another hurricane she would recommend all citizens evacuate.

Terrance and his family say right now they are just waiting for the moment they can return home.