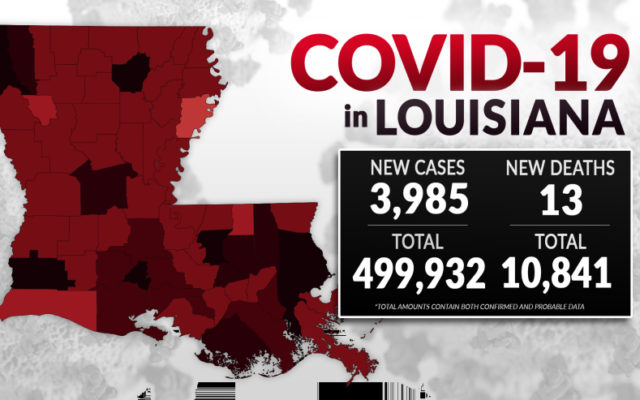 BATON ROUGE, La.– The Louisiana Department of Health on Monday reported 13 more deaths statewide from COVID-19 and 3,985 new cases since Friday, continuing a surge health officials say is driven by the rapid spread of the more contagious delta variant and vaccine hesitancy.

The latest update brings the total deaths from COVID in Louisiana to 10,841 and cumulative cases to 499,932.

Of the new cases reported Monday, the state says 3,108 are confirmed and 877 are probable. The LDH says 97% of these new cases were community spread, and that those between the ages of 18 and 29 and 30 to 39 account for the largest portion of these cases, at 25% and 19% respectively.

According to the latest data available, the number of patients hospitalized statewide with COVID-19 rose by just over 100 since Saturday to 711. Of those, 54 are on ventilators. In Northwest Louisiana, hospitalizations have also continued to rise since the beginning of July, ticking up to 79 as of Sunday. That’s the most hospitalizations since March 4. The number of patients on ventilators has remained relatively flat, with six as of Sunday.

More than 3.4 million vaccine doses have been administered in the state so far, according to the latest data, including nearly 1.7 million completed series.

Of the 388 new confirmed and probable cases reported in Northwest Louisiana since Friday, 170 were in Caddo Parish, where a total of 27,852 cases have been reported since the beginning of the pandemic. One more death was also reported in Caddo, bringing the total to 768.

Webster also added one new death, for a total of 116 in that parish.