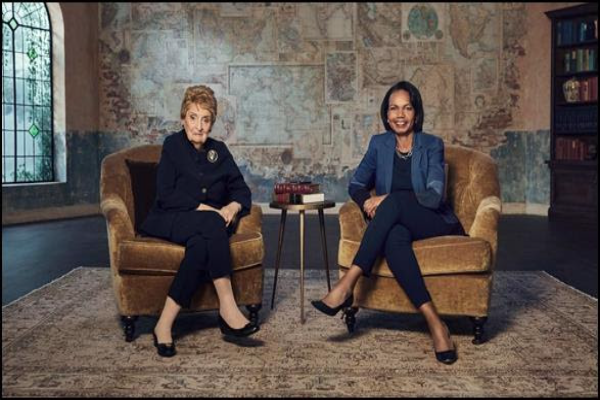 MasterClass the streaming platform where anyone can learn from the world’s best across a wide range of subjects, today announced the launch of a class on diplomacy with two former U.S. secretaries of state—Condoleezza Rice and the late Madeleine Albright. In their class, Albright and Rice provide members with lessons they learned as secretaries of state, including how to build trusted teams, reconcile differences, overcome failed decisions and apply diplomacy in everyday life. Albright and Rice’s class is part of the “MasterClass Presents the White House” series and now available exclusively on MasterClass, where subscribers get unlimited access to all 150+ instructors with an annual membership.

“MasterClass captures the most accomplished people of our era so that we can all learn from them, forever,” said David Rogier, founder and CEO of MasterClass. “We are fortunate to have captured Secretary Albright’s teachings for future generations in this class. As close friends from opposing political parties, Secretaries Rice and Albright emphasize the importance of reconciling differences and disagreements. In their class, they offer insights and advice on building relationships and navigating difficult personalities, assembling and leading teams and evaluating decisions and mistakes.”

Together in their class, Albright and Rice reflect on their extensive diplomatic careers, providing members with unprecedented access to stories from their time in the State Department, counseling U.S. presidents and going head-to-head with global leaders. Interwoven through compelling anecdotes, Albright and Rice expertly outline their personal approaches to diplomacy, equipping members with the qualities that all good diplomats should have—whether members are pursuing a career in diplomacy or just looking to incorporate diplomatic skills in everyday life. The class culminates with an open and honest conversation between Albright and Rice focused on the state of democracy, bringing their unique perspectives from both sides of the aisle to issues such as voting rights, the 2020 election and the growing pains of democracy and its future in America. Members will learn how to effectively collaborate with others to reach a common goal, navigate and mitigate crises, develop a team structure that establishes organizational success and overcome mistakes in order to push past failure and move forward.

“Madeleine was a dear friend and colleague, and this class gave us an opportunity to talk about our unique life experiences in detail,” Rice said. “I am honored to have had the opportunity to teach this class with her. We share the lessons, triumphs and failures we experienced throughout our careers so that we can provide others with the skills needed to navigate the complexities of successful diplomacy.”

Secretary Albright was born in Czechoslovakia and immigrated with her family to the United States in 1948, becoming a U.S. citizen in 1957. She earned her bachelor’s degree in political science from Wellesley College in 1959 and a Ph.D. in public law and government from Columbia University in 1976. Her political career began in 1976 as chief legislative assistant to Senator Edmund Muskie before accepting a position on the National Security Council under the Carter administration from 1978 to 1981. Joining the academic faculty of Georgetown University in 1982, Albright also advised Democratic candidates on foreign policy. After serving as United Nations ambassador during the Clinton administration, in 1997 Albright made history when she became the first female secretary of state, playing a key role in shaping U.S. foreign policy during the Cold War era. Following her tenure as secretary of state, she served as chair of the National Democratic Institute for International Affairs and the consulting firm Albright Stonebridge Group. President Barack Obama awarded her the Presidential Medal of Freedom in 2012. On March 23, 2022, Albright died of cancer.

Secretary Rice was born in Birmingham, Alabama. She obtained a bachelor’s degree from the University of Denver and a master’s degree in political science from the University of Notre Dame. She later returned to the University of Denver and received a Ph.D. from the School of International Studies in 1981. She worked at the State Department under the Carter administration and served on the National Security Council as the Soviet and Eastern Europe affairs adviser to President George H. W. Bush from 1989 to 1991 during the dissolution of the Soviet Union and German reunification. Rice pursued an academic fellowship at Stanford University, where she eventually served as provost from 1993 to 1999. Following the 2000 election, she became President George W. Bush’s national security adviser. In Bush’s second term, she succeeded Colin Powell as secretary of state, becoming the first African American woman to hold the office. After leaving government in 2009, Rice returned to Stanford University, where she continues teaching in the Department of Political Science and the Graduate School of Business. In September 2020, she became the Director of the Hoover Institution.

Albright and Rice’s class is part of the “MasterClass Presents the White House” series, in which members get unprecedented access to and can learn from leaders on both sides of the aisle who have influenced American politics and changed the world. President Bill Clinton’s class on inclusive leadership, former U.S. Secretary of State, Senator and First Lady Hillary Rodham Clinton’s class on the power of resilience, and President George W. Bush’s class on authentic leadership are also available exclusively on MasterClass.