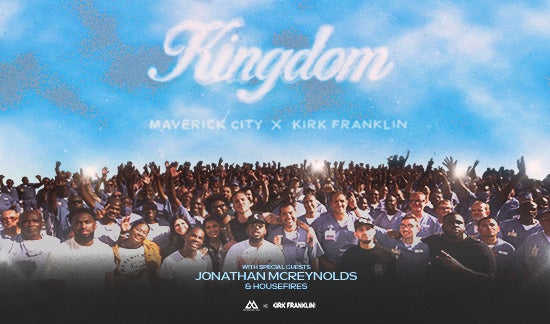 Kingdom Book One, the acclaimed album from chart-toppers Maverick City Music and Kirk Franklin (Fo Yo Soul/RCA), celebrates a nomination in the category of Outstanding Gospel/Christian Album for the 54th NAACP Image AwardsⓇ. This nomination for their live album collaboration follows their other accolades going into 2023, where they have three nominations honoring the album and two of its singles, for the upcoming 65th GRAMMYⓇ Awards taking place February 5th, 2023.

The 16-time GRAMMYⓇ winner Kirk Franklin and GRAMMYⓇ-winning collective Maverick City Music teamed up on the inspirational project (released in 2022 via Tribl Records/Fo Yo Soul Entertainment/RCA Inspiration), recording in a Florida prison yard with the voices of 1,300 inmates, bringing awareness to the plight of mass incarceration and a worship experience of universal love and acceptance. Featuring the GRAMMYⓇ-nominated #1 Gospel hit “Kingdom” and “Fear Is Not My Future,” along with “Bless Me,” “Melodies from Heaven,” “Why We Sing” and more, the superstar artists took their album on the road throughout 2022 on The Kingdom Tour, where they played to sold-out arenas around the country.

Stephanie Valcarcel, President, TRIBL Records, says: “Kingdom Book One made history as a live recording at one of the largest prisons in the country, Everglades Correctional Institution. It was a deep labor of love and collaboration, with the goal to bring forward a unifying Kingdom that represent all individuals. We are honored that this culture shifting body of work has been recognized by the Image Awards and will continue to keep Jesus at the center of all we do.”