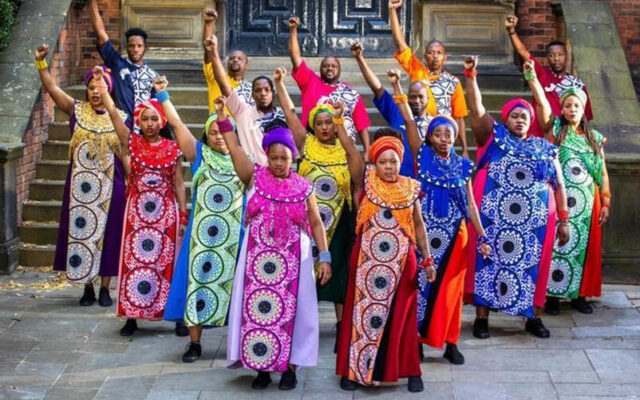 Monifa/Shanachie Entertainment – August 30 2022 — Hope is the very thing that fuels dreams, spurs innovation and ignites perseverance. It costs nothing but yet it is worth everything. Critically acclaimed South African world music sensations Soweto Gospel Choir will release their highly anticipated first new recording in four years, HOPE, on Shanachie Entertainment September 23, 2022 on the eve of 53-city North American tour. The three-time Grammy-winning Choir, whose staunch supporters have included both President Nelson Mandela and Archbishop Desmond Tutu, has performed for everyone from President Barack Obama and Oprah Winfrey and collaborated with Peter Gabriel, Bono, Stevie Wonder, Beyoncé and John Legend, among numerous others. Since the award-winning Choir’s introduction to American audiences in 2004, they have consistently won the hearts of fans with their instantly inviting and awe-inspiring performances. In a time when people are yearning for good news and positive messages, Soweto Gospel Choir fills a void. Their ability to transcend race, religion, age, sex and language, is a welcomed balm. They are on a mission to continue to spread their much-needed messages of love, unity and hope to audiences throughout the world. “Both South Africa and America have experienced the same type of segregation and oppression,” explains the charismatic Choir Master Shimmy Jiyane. “Music was and continues to be a way that the people protest and express opposition. It can express suffering and reach the soul with a message of freedom and hope like nothing else. Through the universal language of music, people are unified globally and they are healed and given hope through the power of songs.”

The diverse material on HOPE speaks to the extraordinary range and capabilities of Soweto Gospel Choir, who has scored two #1 Billboard singles on the World Music Chart. Singing in English as well as five of South Africa’s eleven official languages including Sotho, Zulu, Xhosa, Pedi and Tswana, Soweto Gospel Choir creates a riveting tapestry of lush harmonies and glorious rhythms. Jiyane shares, “It means a lot to the choir as South African artists coming from a township called Soweto to take the sounds of South Africa to the world.” The Choir rehearsed the music for HOPE at the Mofolo Arts Centre in Soweto located within eyesight of the route of a historic and tragic protest on July 16, 1976. 10,000 youth protesters joined forces to protest the forced teaching Afrikaans. Jiyane explains, “Many school children died. The song “Mbayi Mbayi” which opens the album is one of the songs that was sung that day. It is a very personal song for us all but especially for people who live in Soweto. We all have families that died on that road. We have families who went out and joined the march and they never came back.” The cover of Hope is designed by the sensational South African illustrator, graphic designer and street artist, Karabo Poppy. Poppy has an impressive list of credits that includes work for Nike where she designed Air Force 1 sneakers worn by Lebron James.

HOPE also features a dazzling version of  Al Bell’s Stax classic sung by the Staple Singers “I’ll Take You There,” Stevie Wonder’s poignant “Heaven Help Us All” sung in English, Zulu and Sotho and Hugh Masakela’s “Sechaba,” from the hit musical Sarafina! which premiered at the Cannes film festival in 1991. A particularly breath-taking moment on HOPE occurs on the Xhosa hymn “Bawo Xa Ndilahlekayo,” which means “Lord if I get lost, please lead me back to you.”  The song is dedicated to the Choir’s beloved friend and leader, Mulalo Mulovhedzi who passed away in early 2022. Mulovhedzi, was a founding member and the General Manager of the choir. This was his favorite hymn. “We deeply feel his loss and are touched whenever we now sing it. It is as if Mulalo were still with us, taking his place beside us,” collectively shares the Choir.

Although fellow South African performers Ladysmith Black Mambazo and Black Umfolosi have introduced many to South African song, the experience of hearing and seeing Soweto Gospel Choir live is like no other. Their emotionally rich vocal performances, athletic dance numbers and spectacularly colored traditional garb engage all the senses. However, despite playing sold-out international tours and appearing on national TV, no amount of glittering international recognition and praise has diverted Soweto Gospel Choir from the mission it holds close at heart. In 2003, the choir founded its own aids orphans foundation, Nkosi’s Haven/Vukani (the word ‘Vukani’ means ‘do something!’). The choir’s charity, in conjunction with Nkosi’s Haven (a Soweto-based AIDS-care project established by Gail Johnson), whose late son Nkosi, at age 11, gave a moving address to a United Nations international AIDS conference that was televised world-wide), raises funds for AIDS orphan establishments that receive no government or private funding.   As South African natives and individuals who have become world citizens through their gift of music, Soweto Gospel Choir firmly believes in their mission to support individuals who are less fortunate. Through their charity they are able to help feed and clothe individuals, pay for funerals for families who are unable to and assist numerous young children who are orphaned by AIDS, many who are responsible for heading their own households. In the past year alone, the members of Soweto Gospel Choir have fed over 3000 children, assisted with three funerals, paid for schooling for two young men and allowed Nkosi’s Haven, its mothers and children, to function with minimal stress by providing funds for food, school and specialized therapies.

“Soweto Gospel Choir ( comprised of young musicians mostly in their 20’s ) was formed in late 2002 by Producers Andrew Kay and David Vigo and led by the former Musical Director of the choir, the late David Mulovhedzi together with Executive Producer Beverly Bryer.” Now twenty years in the making, Soweto Gospel Choir is continuing to reach new heights and more committed to their vision than ever before. “Covid hit everyone hard,” concludes Shimmy Jiyane. “Economies plummeted, many people lost their family members, friends, businesses, jobs and homes. All our mental health suffered and we all experienced how life can change in the blink of an eye. For us as artists not to be able to express our art broke our hearts. Our desire is that through listening to this album we can help start the healing process to enable people to find HOPE.”