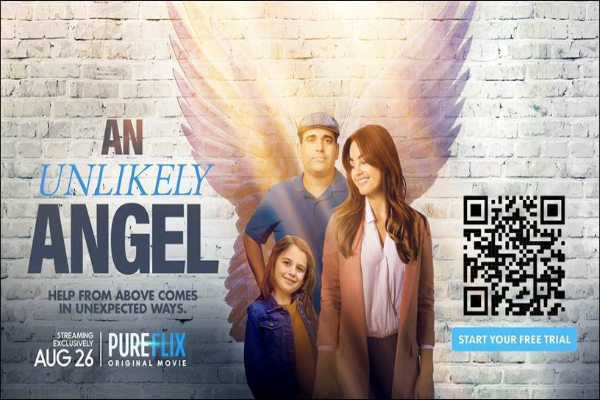 A new inspiring film, “An Unlikely Angel,” is about overcoming fear, balancing priorities, and getting a second chance will stream exclusively on Pure Flix on August 26, 2022.

The Pure Flix Original movie is about Janie, a workaholic falling apart at the thought of becoming a first-time mom. She whispers a small prayer for help, and it’s answered in a very unlikely way when an angel intervenes and fast forwards her life. Janie is lucky enough to be given a second chance, but will she change before it’s too late?

“This film showcases the complicated balance between work and family. So many of us are multitasking through life and fixated on future goals that we are missing the here and now,” said actress Jillian Murray, who plays Janie. “Living in the moment and being present with family is so important. This movie reminds us to stop and appreciate what we have right before us.”

“An Unlikely Angel” is one of 13 new original films and series exclusively debuting on Pure Flix in 2022, the destination for wholesome family entertainment.

Click here to see the trailer for the new original movie “An Unlikely Angel,” which premieres exclusively on Pure Flix on August 26, 2022.