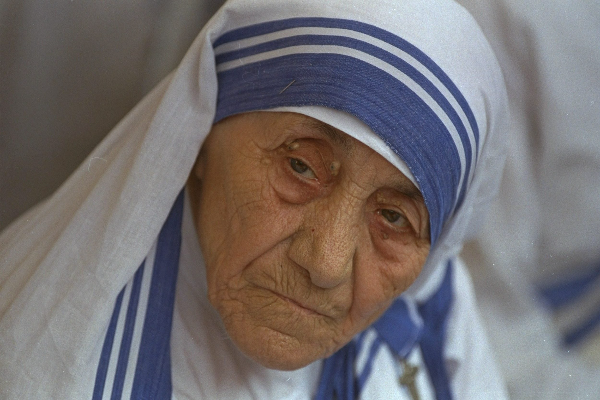 Mother Teresa of Calcutta is one of the most widely revered saints in the world and one of the greatest spiritual giants of the 20th century. She is a powerful witness of authentic Christian charity and a guidepost for all who seek hope in our turbulent times. “Mother Teresa: No Greater Love” is a unique film that reveals not just who Mother Teresa was but how her singular vision to serve Christ through the poor is realized today through the religious order she founded, the Missionaries of Charity.

“Mother Teresa taught us that there are no expendable people,” Knights of Columbus Supreme Knight Patrick E. Kelly said. “Everyone we encounter is made in the image of God. So, when she was feeding the hungry or holding the hands of someone as they lay dying, she was treating them as she would the most important person in her life, Jesus Christ himself. And, in all of this, she was teaching us to have a heart that sees, and if we can learn to see as she did, the world would be a radically different and, I would say better place.”

Produced by the Knights of Columbus, filmed on five continents and featuring unprecedented access to both institutional archives and the apostolates of the Missionaries of Charity, “Mother Teresa: No Greater Love” chronicles the life of Mother Teresa and the profound spiritual and physical impact she and the Missionaries of Charity have had — and continue to have — on Catholics and non-Catholics alike throughout the world. The documentary also addresses Mother Teresa’s admitted periods of spiritual darkness while serving the poorest of the poor, and her friendship with another revered saint, Pope John Paul II.

“Mother Teresa’s incredible acts of kindness changed the world,” said Ray Nutt, CEO of Fathom Events. “We are proud to partner with the Knights of Columbus to bring this film to theaters nationwide and hope that it cannot only shine a light on this saint of our times but change lives in the process.”

“Mother Teresa: No Greater Love” is produced by David Naglieri of the Knights of Columbus and features commentary from prominent Catholics, such as Patrick E. Kelly, Supreme Knight of the Knights of Columbus; Bishop Robert Barron of the Diocese of Winona-Rochester and founder of the Catholic ministerial organization Word on Fire; Jim Wahlberg, filmmaker and humanitarian; Fr. Donald Haggerty, a priest of the Archdiocese of New York; Jim Towey, a trusted advisor and personal friend of Mother Teresa of Calcutta, and author of “To Love and Be Loved: A Personal Portrait of Mother Teresa“; and Fr. Brian Kolodiejchuk, postulator of Mother Teresa’s cause of canonization and author of three books on Mother Teresa.