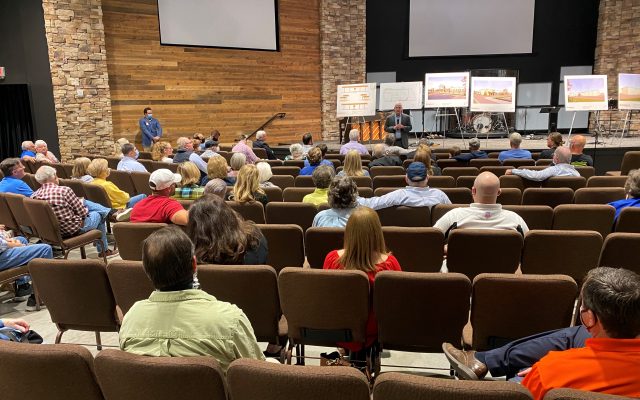 SHREVEPORT, La. (KTAL/KMSS) – Developers and the CEO of Brookshire’s grocery store, are considering building a new location in south Shreveport.

Thursday, Mohr and Associates Inc., the civil engineering service surveying the land, hosted a community meeting at the Norris Ferry Community Church. Dozens of residents from the area attended the event to hear the CEO’s sales pitch.

He said the company has not built a new store since 2017. They feel as if the 13.3-acre of land is good for business.

The new store would be 56,000 square feet and bring over 200 jobs to the area. Developers said the store will have a unique style that would benefit the community.

“A year or so ago we re-looked at this site. We had a market study done and it said economically it would be a good site for us,” Brad Brookshire said.

However, residents near the site at Norris Ferry and Southern Loop said they love Brookshire’s but disagree with it moving to the area.

“Right here? No. I think they should try to move it a little bit further, maybe off of the Southern Loop or I-49 that would be the best option,” Shelby Sandefur suggested to developers.

“One thing I am concerned about is the traffic increase; also the entrances and exits of the store,” Michael Johnson said.

Shreveport city Councilman Grayson Boucher said any business would be beneficial for the city’s overall growth.

“So for them to want to come to our neighborhood and to make such an investment is important to us. And I think that signifies that Shreveport is growing and it’s not dead,” Councilman Boucher said.

After listening to many residents complain and some approve of the project; Brookshire’s CEO said they will take concerns from the citizens back to the drawing board.

“We’ll definitely go back and see what we can do for the inside of our store, you know the entrances and the traffic. We will work as much as we can with the city to help that intersection create a four-lane road just to encourage people,” Brad Brookshires said.

He said if they receive the green light from the Caddo Parish MPC and Shreveport city council, construction could begin as soon as the fall of this year and be complete within the fall of 2022.