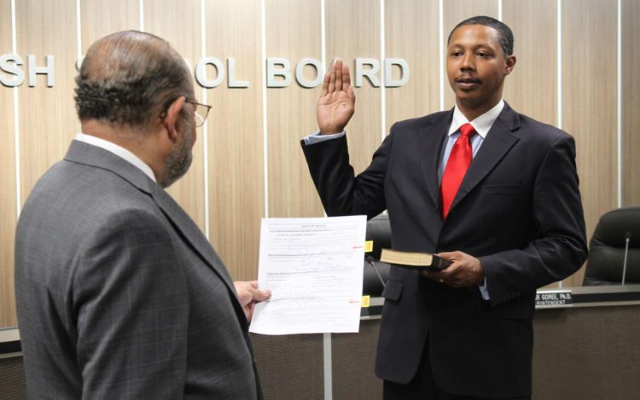 A Booker T. Washington High School alumnus will now represent his alma mater and the community it serves following a majority vote by members of the Caddo Parish School Board on Friday.

Dr. Terence Vinson was selected from among two candidates who applied to fill the vacancy created after the passing of Board Member Lloyd Thompson. Board Members interviewed candidates regarding their qualifications, experiences and what they saw as their role as a school board member.

“I’m grateful to the Caddo Parish School Board for allowing me the opportunity to serve as a member of the Board,” Dr. Vinson said. “It is such a blessing to serve a community that made me who I am and provided me such a strong foundation. It feels in some ways to full circle. I look forward to working with Dr. Goree to support our students and families as we improve educational outcomes.”

During the interview portion of the meeting, Dr. Vinson described to the Board his deep commitment to District 3 which he said prepared him for his future in higher education. In addition to his desire to provide additional resources for the students of District 3, Dr. Vinson said he felt a need to put his personal and professional experiences to use through his work as a Board Member.

Dr. Vinson brings to the position his knowledge as an educator including his current role as Department Chair of Education at Southern University at Shreveport.

After a majority vote by the Board, Dr. Vinson was sworn in during the virtual session and was administered the Oath of Office. He later visited Central Office where General Counsel Reginald Abrams again administered the Oath in person while practicing social distancing. Dr. Vinson will serve until a special election is held on Nov. 3 and a candidate is selected. Qualifying for the election will take place July 15-17.

The District 3 position was declared vacant earlier this month after the passing of Thompson. Thompson served on the Board since January 2019 and chaired the Long-Range Planning Committee.

“Mr. Thompson left big shoes to fill for anyone who was to come after him,” said Board President Mary Trammel. “We are pleased to welcome Dr. Vinson to the Board and as he represents an area that meant so much to Mr. Thompson. We look forward to Dr. Vinson’s contributions as we work to make ourselves a cohesive team in service to Caddo Parish.”