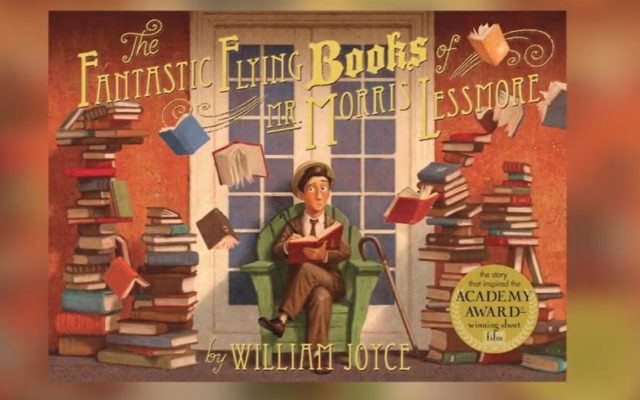 BATON ROUGE, La.– An award-winning author and filmmaker from Shreveport is being featured in the Library of Congress ‘Read Around the States’ video.

The Louisiana Center for the Book in the State Library of Louisiana recently announced its contribution to “Read Around the States,” a project of the Library of Congress with its state affiliates to promote books, reading, libraries, and literacy nationwide. It features videos with members of the U.S. Congress from each state reading from a children’s book associated with their states.

The book selected by Sen. Bill Cassidy is The Fantastic Flying Books of Mr. Morris Lessmore by children’s author and illustrator William Joyce.

An interview with Joyce conducted by Jim Davis, Director of the Louisiana Center for the Book, follows the Senator’s reading of an excerpt from the book.

Lieutenant Governor Billy Nungesser said, “I can’t think of another Louisiana children’s book that so universally promotes the value of reading and libraries and how books truly enrich our lives, no matter what our age.”

State Librarian Rebecca Hamilton said, “We were so pleased of this opportunity to be an early participant in this Library of Congress project and to learn of Senator Cassidy’s book selection. Bill Joyce is a true friend of the State Library and its Center for the Book, and ‘Morris Lessmore’ affirms everything we fundamentally stand for: the transformative power of reading.”

Joyce is a steadfast supporter of the State Library and its Center’s efforts celebrating books and literacy, having attended the Louisiana Book Festival six times and additionally having created the special artwork for the 15th festival featuring Morris Lessmore. He is a recipient of the Louisiana Center’s Louisiana Writer Award, the first children’s author receiving the honor.

Joyce’s work has appeared on numerous covers of The New Yorker magazine and has won six Emmys, three Annies, and an Academy Award for the animated version of “Morris Lessmore.” Joyce began his career as a children’s book author/illustrator in 1981 and published his first self-illustrated work, George Shrinks, in 1985.

Today he is the award-winning author/illustrator of more than 50 best-selling children’s books and novels, which have been translated into over 40 languages. He received the 2017 Humanist of the Year Award from the Louisiana Endowment for the Humanities.