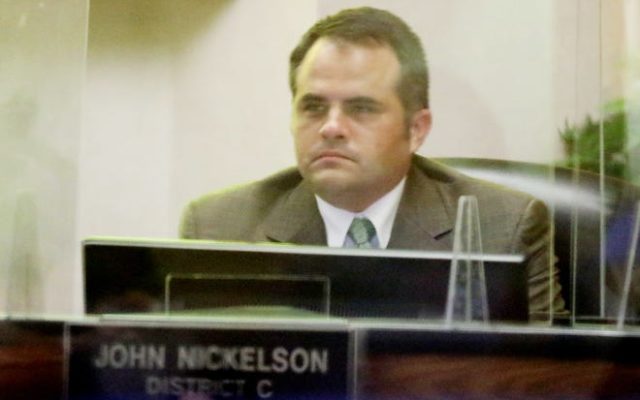 Shreveport city councilman John Nickelson during their meeting met at Government Plaza, which has taken precautions in place to protect against coronavirus, on August 11, 2020. Heniretta Wildsmith/The Times

District C – City Councilman John Nickelson expressed in a post via social media that he would not support the one-time pay raise proposed by the Perkins administration for city employees. Here is what the Councilman posted to social media:

“Like every member of the City Council, I deeply appreciate the hard work of the thousands of city employees who faithfully serve the public every day. When you call 911, police officers and firefighters are prepared 24/7 to respond on a moment’s notice. When you turn on a faucet in your home, clean water comes out. When you put your garbage by the street, sanitation workers carry it away. None of this would be possible without the tireless dedication of our employees, and we all owe them a great debt of gratitude for their service.

As difficult as the decision has been, I’ve nonetheless come to the conclusion that I cannot support the administration’s proposal to give a “one-time payment” ($1,000 for full-time employees and $500 for part-time employees) to employees who did not receive the public safety pay raise the Council approved last week.
I’ve decided to vote against the proposal for two reasons. First, the Louisiana Attorney General has consistently opined that our state constitution prohibits “the payment of a bonus, or any other gratuitous unearned payment, to public employees.” Based on all the information I have received and considered regarding the administration’s proposal, it is plain that its proposed “one-time payments” would in fact be unconstitutional, gratuitous bonuses. The Council simply cannot give away the public’s money, even to deserving city employees.
Second, the fact sheet submitted with the legislation which would authorize the bonuses provides in part that the city is able to provide a “one-time lump sum pay increase due to the [federal] CARES Act funding” it has received. But the Department of the Treasury has issued explicit guidance prohibiting the use of federal Coronavirus relief funds for “workforce bonuses other than hazard pay or overtime.” Even if the state constitution allowed us to give public employees bonuses – which it does not – we could not use CARES Act funding to do so.

I am committed to ensuring that all city employees are paid fairly for their service, but I cannot support bonuses prohibited by both the state constitution and federal law, and I hope my colleagues will join me in voting against this legislation.”