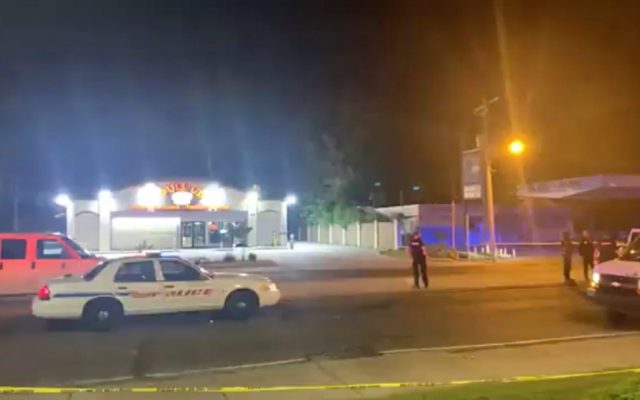 Police personnel and their vehicles are seen near the scene in the aftermath of a drive-by shooting at a liquor store in Shreveport, Louisiana, U.S., April 18, 2021, in this still image from video obtained via social media. LOVE SHREVEPORT-BOSSIER via REUTERS ATTENTION EDITORS - NO RESALES. NO ARCHIVES. THIS IMAGE HAS BEEN SUPPLIED BY A THIRD PARTY. MANDATORY CREDIT.

SHREVEPORT, La. — The nation was talking about Shreveport on social media on Saturday and Sunday, but for very different reasons.

The Bayou Classic and Port City Fest had Shreveport trending on Twitter all day on Saturday.

“The city of Shreveport pulled out all the stops, did a great job,” said Liz Swaine, Executive Director of Shreveport’s Downtown Development Authority.

Crowds came to enjoy the game and hit the town to have a good time, enjoying food and nightlife.

“Especially in the downtown area, but even vendors throughout the city have been sending me messages,” said Shreveport Mayor Adrian Perkins. “[Business owners] have been calling the office saying just how thankful they are because of how much business they got this weekend.”

“These were both locals and folks from out of town. And I think, by and large, everybody had a great time,” said Swaine.

The scene changed on Sunday night, however, when numerous shots were fired into a crowd of people who had gathered in and around their vehicles at a Raceway gas station on Hearne Avenue -about a half-mile away from Independence stadium where the game was played on Saturday.

According to the Shreveport police, five people were injured or shot and taken by private vehicles to local hospitals. When officers arrived on the scene, they found a sixth victim, a man who had been shot multiple times. Police say the victim is in critical condition at a local hospital.

“Cruising goes on here on Sunday’s,” said Joey Bartlett, an Assistant Chief with the Shreveport Police Department. “And apparently there was congestion here and someone started shooting.”

A video captured by a witness of the shooting was shared and viewed hundreds of thousands of times across the country on Twitter.

“During the weekend we had Shreveport Police, the FBI, State Police, the sheriff’s office. I mean we had so many community partners come together to keep things safe,” said Perkins. “And it’s just a reminder to us that we can have such a phenomenal weekend and still have to deal with that. And we have to double down on our public safety infinitives.”