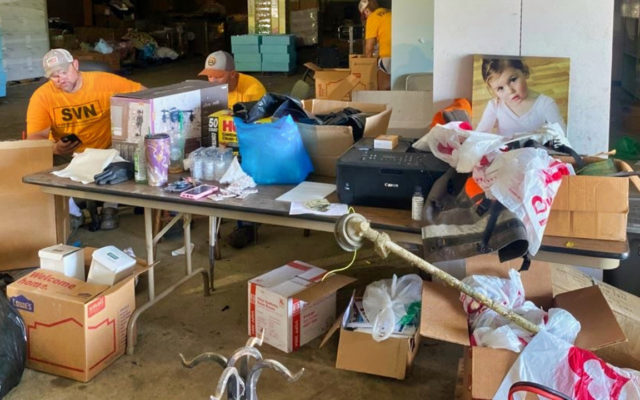 SHREVEPORT, La.– The Shreveport Volunteer Network is asking the community to donate supplies –  to be used by the United Cajun Navy –  to give relief to Hurricane Ida  survivors.

Two loads have been sent and today volunteers were at the former South Park Mall collecting more donations.

“Having a hurricane that’s even worse than last year’s only means that we’re going to need to have more supplies,” said Tommy Giles, the executive director of Shreveport Volunteer Network.

Water, food, hygiene products and gas cards are some of the things most needed.

“When we’re able to go up to a pump and give people gas cards,” Giles said. He added that sometimes, people are using the last of their money – “four or five bucks” – to fill up a generator to keep their house going. A $20 or $50 gift card that, “after waiting in line for three hours, could really make somebody’s day.”

Shreveport Volunteer Network is also asking for chainsaws and diesel fuel to help cut trees and clear them out of the roads after the hurricane has passed.

Keith Bryant, president of Shreveport Volunteer Network, said after Hurricane Laura in 2020, they helped about 250 families by removing trees and debris from the storm, adding that he’s never seen a storm like Hurricane Ida in his lifetime.

These donations, he said, will “be critical…lifesaving.”

Aubrey Kuntz, a student from Louisiana State University in Baton Rouge escaped the storm just in time. She was helping the volunteers Sunday.

She said she was already home when the winds got really bad but said she “was walking to class the other day almost falling over cause it was so windy.”

Aside from cases of water, the Network is asking for other essential supplies like toothbrushes, toothpaste and toilet paper, which will be needed for several days or possibly even weeks.