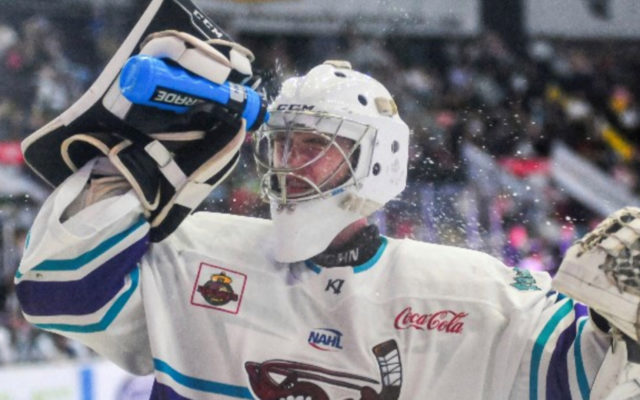 SHREVEPORT, La – It’s a story that not even Hollywood could write.

When you look into the eyes of Shreveport Mudbugs goaltender Cole Hudson, there’s a lot of things you don’t see. You don’t see the injuries, dedication, and commitment it’s taken Hudson to get to the North American Hockey League.

The thing that’s easiest to overlook, the fact Hudson is legally blind.

Overcoming such a tall hurdle physically would be enough to make Hudson’s story one of inspiration, but it’s what the New York native has had to go through in the world of Junior Hockey which makes his story all the more impressive.

“A guy that’s been told no from 10-12 teams, probably discouraged him at times, probably made him think he’d have to quit hockey at some point,” said Mudbugs Broadcaster Chet Yoder. “But he kept persevering and kept battling.”

Hudson thinks all those rejections have helped fuel the fire which helped him find his way to Shreveport.

“It’s been a little bit of a tough journey but it’s made me who I am all because of the years prior with being told I wasn’t good enough.”
But how does one find his way to Shreveport to be a Mudbug? Two steps, a phone call to Head Coach Jason “Soupy” Campbell, followed by a fifteen-hour drive.

“I gave ‘Soupy’ a call and he told me there might be an opportunity for me here.” An opportunity there was, “He drove from Minnesota to Wichita Falls Texas, met us there. So there’s a level of commitment right there.” says Coach Campbell.

Once in Shreveport, Hudson thrived. Once branded an outcast, the New Yorker was named the NAHL Goalie of the Month in November and a Star of the Week in the league’s South Division in December. Hudson has compiled a 12-4 record to go along with a 92-percent save percentage. He’s parlayed his strong play into an opportunity at the next level, committing the University of Vermont to play NCAA Division I hockey once his junior hockey days are done. When that day comes, Hudson will still cherish the community that gave him a chance.

“Shreveport has been by far my favorite hockey memory to date. Shreveport is going to have a nice little close spot in my heart for a while.”

There’s a lot of things about Cole Hudson that don’t meet the eye. But when you dig a bit deeper. You find the embodiment of never giving up.

“He’s inspired me because I want to move up in this business, and trying to get better each and every game that I broadcast, says Yoder. “Cole Hudson has been a really big inspiration for myself just as much as the organization.”

His Head Coach believes he’s been a perfect fit both on and off the ice.

“He’s just come in right from the start and just been a great asset. The boys love him in the locker room, the coaching staff enjoys having him around and he’s just done a great job in the community.”

The end goal for Hudson and the Mudbugs this year? It’s simple.

“We’re not stopping anytime soon. We want to win a championship.”