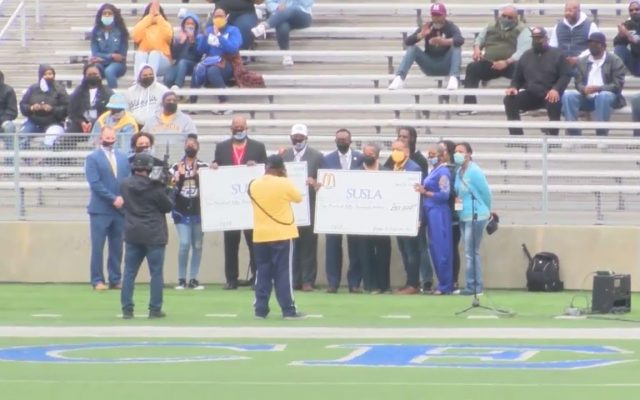 SHREVEPORT, La. (KTAL/KMSS) – On Saturday, prior to the start of the Bayou Classic in Shreveport, a major business development initiative for Southern University at Shreveport was announced.

The initiative is rooted in a half-million dollar pledge from local businessman Roy Griggs.

“I’m so proud to partner with Southern University,” said Griggs, the owner of Griggs’ Enterprises.

SUSLA received a ceremonial check from Griggs Enterprise in the end-zone of Independence Stadium. It’s the initial investment in the Roy Griggs School of Business set to open in the spring of next year.

“Hopefully by partnering with Southern University, someone that they might know and respect a little bit, might influence them to further their education career,” said Griggs.

He’s the owner of 14 McDonald’s restaurants in northwest Louisiana and East Texas, employing around 700 people. Griggs wants to pass along the knowledge he’s gained to the next generation.

“Motivate our young, especially our young men, shall I say, to not have a lack of desire to further their education,” said Griggs.

The business school will be located on the second story of Alphonse Jackson Hall on SUSLA’s main campus. According to SUSLA’s chancellor, it will allow the university to retain talent that’s already on campus.

“Faculty, especially at the post secondary level, at the community college level, are undervalued because we can’t afford to pay them what they’re really worth.” said SUSLA’s chancellor Dr. Rodney Ellis. “We will be able to incentivize them to stay here in Shreveport.”

Dr. Ellis says the business school will offer students opportunities for growth in a number of existing and emerging fields.

“That’s my hope and my dream. That we can get more young kids involved in their education here in Shreveport,” said Griggs.

According to SUSLA, Grigg’s half-million dollar pledge is a large part of the $2 million needed to launch the new business school.\