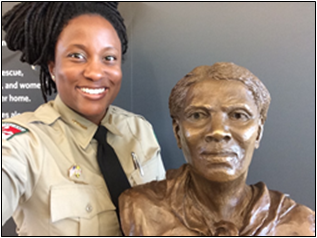 Harriet Tubman’s Life and Legacy will be presented at historic Harriet Chapel (Catoctin Episcopal Parish), 12625 Catoctin Furnace Rd, Thurmont, MD at 11 a.m. on September 17, 2022. The program is co-sponsored by Harriet Chapel and the Catoctin Furnace Historical Society and is free to the public (donations accepted). Speaker, Angela Crenshaw with the Maryland Department of Natural Resources, is planning a program that will be engaging for all ages. Offered on the anniversary of Tubman’s first flight to freedom from enslavement, which took place on September 17, 1849, the event also recognizes Underground Railroad Month (September) and the bicentennial of Harriet Tubman’s (c. 1822-1913) birth in 2022.

Ranger Angela Crenshaw will share the story of Harriet Tubman, the most famous conductor of the Underground Railroad, who also served as a scout, spy, guerrilla soldier and nurse for the Union Army during the Civil War. Her social activism also included participation in the movement for women’s suffrage. Crenshaw’s one-hour program will feature the centrality of faith, family, community, and nature in Tubman’s life’s work.

From 10 am. Until 2 p.m., before and after the 11 a.m. presentation, visitors may enjoy tours of the historic church (c. 1828) and may view the Museum of the Ironworker, across the street, or follow the nearby African American Cemetery Trail. The trail starts at the remains of the Catoctin Iron Furnace, which is a designated site on the Underground Railroad Network to Freedom.