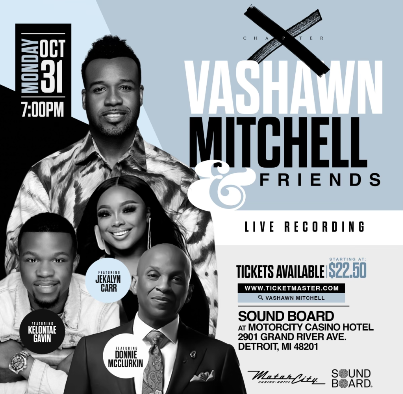 Seven-time Stellar Award winner and 2x Grammy-nominated recording artist, VaShawn Mitchell, will be conducting a live recording for his newest album, “Chapter X” at Sound Board at Motor City Casino Hotel on Monday, October 31 at 7pm. This album embarks on the journey of “newness” with a new sound and energy that his fans are going to love!

When asked about this new chapter, Mitchell says, “I’m excited to be in the creative space again to write, sing and produce music that will live in the hearts of listeners around the world. These songs will encourage, empower and uplift both now and for generations to come.”

“Newness”, as he defines, is “an overall recharge from the inside out”. He’s embarked on a new health and wellness plan, he’s exploring new fashion as well as a new sound in his music. “I want my fans to get ready for something completely different and unexpected from me.” After the death of his grandmother, Mitchell admits to falling into a deep depression. “She was my rock…my everything” he says.  Now having grieved the loss of one of his greatest heroes, he knows his fans have missed him, and he is excited to launch this new chapter in the great City of Detroit!